Not quite sure what the title of this entry means?  Well then you  aren’t on Twitter and you definitely don’t follow any of the Indians players.  A couple hundred Indians fans were #LouMar’d on Sunday and probably didn’t even realize it as it was happening and that’s  just the way Lou Marson likes it.

Where did this happen, you ask?  At a post game autograph session. 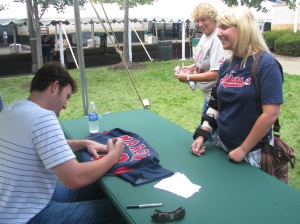 The autograph session was for any fan who donated a glove for the Cleveland Indians and KeyBank Glove Drive that ran throughout the season.  The concept was simple, you donated a glove and received a free ticket to the August 28th game, as well as a pass into the autograph session.  Matt LaPorta, Carlos Santana and Vinnie Pestano were also on hand signing for fans.  As always, thanks goes out to these 4 guys for making sure every fan got an autograph…and #LouMar’d.

The season long (almost) glove drive brought in over 800 gloves which will be donated to the Cleveland Baseball Federation–helping kids play the game of baseball.  The Baseball Tomorrow Fund was also on hand at the game and presented Cleveland Baseball Federation a check for $5,000 in honor of Justin Masterson for all of the work he does in the community and for his efforts during the glove drive.

I remember growing up and getting my first baseball glove.  I was in kindergarten and had just signed up for T-Ball.  I didn’t know anything about baseball, but my older brother (who is only a year older than me) was playing and I wanted to be on the same team as him.  I also knew going in that, because my older brother was left-handed and I was right-handed there was no way that I would get his hand-me-down glove.  For once, I could get something new that didn’t belong to my brother first!  My mom took us to the store to get my brother some new sweatpants and cleats and a new glove.  I was, of course, getting his old sweatpants and cleats that he grew out of.

I was so pumped to go and pick out my glove when I noticed something.  My brother, although left-handed for everything…EVERYTHING…picked out a right hander’s glove.  It was then that I was informed that he was right-handed only when it came to throwing.  We got home from the store and my mom handed me his old glove and that was that.  But you know what?  That was an amazing glove and it was my glove. I made it my own and took care of it, and it was a part of me as I learned the world of baseball.  Plus, I didn’t have a growth spurt for about 3 years after that, so the glove lasted me quite a while.

The Cleveland Indians are partnering with KeyBank on a season long glove drive.   The KeyBank Glove Drive started on Opening Day and will run until August 28.  Here is what you have to do to participate:  Bring a new or gently used glove to the next Indians game with you, take it to our Guest Services booth, and we’ll give you a ticket to the August 28th game as well as a voucher that allows you entry to a post-game autograph session by select Indians players that day!  Plus, you’ll be entered in a drawing where you could win the opportunity to throw out the ceremonial first pitch at the game that day!

You can also participate by bringing your glove to a local KeyBank and filling out an entry form.  It’s that easy!  All gloves will then be donated to Cleveland Baseball Federation and given to local youth to use while learning the game of baseball.  So bring a new or gently used glove with you to the next Tribe game and instead of using it to catch foul balls in the stands, donate it to the KeyBank Glove Drive.  Who knows? Your glove could get into the hands of the next Grady Sizmore…or the next Justin Sherman: Community Outreach blog writer and former T-Ball player!  Either way, you’ll help connect with the next generation of baseball fans in our community!