You know how when you were growing up and the cool thing to do was to have a fern?  Remember begging your mom and dad to buy you one and when they finally caved in and did it, you got too busy with other stuff and ignored the fern until it began to wilt?  And then once you noticed the fern was starting to wilt, you just gave it a bunch of plant food and doused it with water to catch up for what you missed when you were too busy.  What I’m getting at is that this blog has been my childhood fern.  I got crazy busy in April and the first part of May and am now giving it a bunch of information to catch people up on what we are doing.

So what have we been up to since the last post?  Here is a quick recap:

UMPS CARE Charities–a couple of times a year, the Cleveland Indians team up with Major League Baseball and its umpires to bring in a select group of kids that get to meet the umpires prior to a game.  The kids can ask the umpires questions, get their autographs and take a few pictures while down on the warning track behind homeplate. 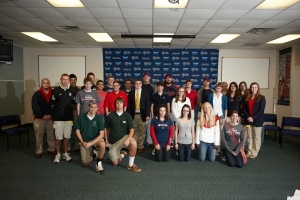 Tribe Reporter for a Day–The Cleveland Indians and The Plain Dealer partnered once again for their annual Tribe Reporter for a Day event on May 9.  The event allows 25 local, aspiring, high school journalists to come down to Progressive Field and experience a ‘day in the life of a sports reporter.’  The young journalists started their afternoon by visiting the Indians Social Suite and talking with the Assistant Director of Communications for the Cleveland Indians, then made their way down to the Press Interview Room to sit in on Manny Acta’s press conference.  After the conference, Manny hung around to let the students ask him a few questions.

From here, they spoke with The Plain Dealer’s sports writer Paul Hoynes who gave them valuable tips and words of wisdom in regards to sports writing.  The event was capped with the reporters’ very own press conference with Indians pitchers Chris Perez, Nick Hagadone and Josh Tomlin.  The journalists even had an assignment given to them with a deadline!  They had to write about their experience and submit it to The Plain Dealer by the very next day!

All in all, it has been a productive April and early May.  We’ve got our Cleveland Indians Charities Friday night auction coming up on May 18, followed by our Wives Association’s Tribe Treasure auction on May 19.  Gotta keep my fern alive, so more posts to come in the near future!